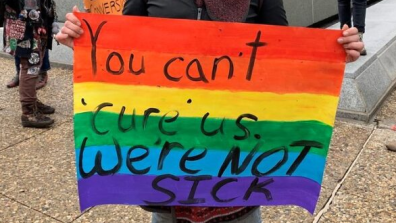 When Aswathi told her parents she was a lesbian, they took her to a nun and then to a doctor, who wanted to run hormone tests to make her straight – one of thousands of LGBT+ Indians subjected to conversion therapies that are now facing a possible ban.

Aswathi’s mother cried that her 22-year-old daughter refused to get married, and was an embarrassment to her family, and she asked the doctor in the southern Indian state of Kerala for medicine to “cure her ailment”.

“We’ll investigate why you’re not interested in intercourse with a man,” the doctor told Aswathi, who declined to publish her real name, in an audio recording of the consultation shared with the Thomson Reuters Foundation.

“You have to get admitted here and we need to do some tests to check what is wrong with you … Conclusions can only be drawn based on the test results and there will also be counselling sessions.”

Kerala could become the first state in India to make it illegal for health care professionals or religious leaders to try to alter people’s sexual orientation or gender identity through such treatments, which have no scientific backing.

Widely condemned by leading medical groups, including the World Psychiatric Association, conversion therapies [to try to] make LGBT+ people straight, can involve everything from beatings and ‘corrective rape’ to electric shocks and forced nudity.

Local LGBT+ rights group, Queerala, went to court in Kerala in June, after an upsurge in reports, from LGBT+ people, of being forced by family members during the new coronavirus pandemic to visit doctors to be ‘cured’.

The director of Kerala’s social justice department, which deals with matters concerning sexual minorities, said she could not immediately comment, as she was travelling, and first needed to consult with other department officials.

The United Nations has called for a global ban on conversion therapies, but worldwide, only three countries – Brazil, Ecuador, and Malta – have nationwide bans, with plans under consideration in New Zealand, Canada, Britain and Ireland.

Kerala High Court on Wednesday agreed to admit Queerala’s petition, which calls for all forms of forced treatment or conversion therapy claims to be declared “illegal, unconstitutional and a violation of fundamental rights”.

Rajashree Raju, one of Queerala’s board members, said they decided to act after Anjana Harish, a bisexual student from Kerala, died by suicide in May, after posting a video on Facebook detailing the treatment her family made her undergo.

In the video, Harish said she was she was given medication to sedate her, “like a robot”, at a Christian-run mental health centre, and kept in a cell apart from at meal times.

“I was given some 40 injections … I was mentally and physically broken,” she said, adding that the six weeks of treatment at two centres began in December.

“My own family did this to me, that’s what saddens me the most. The ones who were supposed to protect me, tortured me.”

The Thomson Reuters Foundation has been unable to independently verify Harish’s account, but Queerala said it had received calls from 40 survivors, who said they had been subjected to similar practices, since lockdown began in March.

Anand Ampeethara, a Queerala helpline counsellor, said he handled more than 1,200 cases, including suicidal calls, between March and June – a sharp increase compared to the 1,500 cases he handled in all of 2019.

“LGBT+ people who returned home after losing their jobs or the closing of educational institutions were facing huge pressure from their families,” he said.

Official statistics on conversion therapy are not available, but Queerala found in a 2019 survey, that about 20 mental health centres were conducting conversion therapy in Kerala, as same-sex relations are taboo in socially conservative parts of India.

The Indian Association of Clinical Psychologists (IACP), a professional membership group, said in May that “conversion practices by therapists are still rampant in our country” despite India’s decriminalisation of [homosexuality] in 2018.

“They use … a variety of shaming, emotionally traumatic or physically painful stimuli to make their victims associate those stimuli with their queer identities, often at the insistence of misinformed parents or caretakers,” it said in a statement.

The IACP advised its members not to use conversion therapies, which it described as unprofessional and traumatising, and warned they can lead to depression and suicidal ideation.

After Harish’s suicide, numerous medical groups spoke out against conversion therapies, but Kerala’s neighbouring state, Tamil Nadu, is the only one to officially condemn it as “unwarranted and unscientific” in a 2019 mental health policy.

LGBT+ campaigners said a ban on conversion therapy was critical, but attitudes also needed to change to stop parents forcing their children to marry.

“I had a partner until a year ago but he abandoned me and married a woman after facing pressure from his family,” said a gay man, who was rejected by his family after he refused to continue having conversion therapy with a Christian priest.

“I felt very depressed after that … Currently I have no idea about my future,” said the man who declined to publish his name.