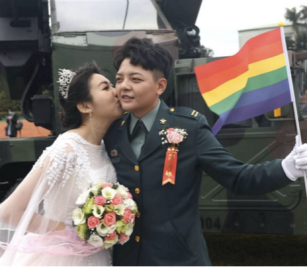 (Reuters) – Two women became the first military officers to marry their same-sex civilian partners at a mass military wedding in Taiwan on Friday, marking another landmark for LGBTQ+ rights in Asia.

The defence ministry called it an “open and progressive” move, and said it gave its blessings to all 188 couples married during the annual mass wedding in Taiwan, considered a beacon of liberalism in the region.

“I am hoping to boost the visibility of homosexuals so that people understand we are also just part of everyday life,” said Major Wang Yi, who broke down in tears after receiving her marriage certificate, at the ceremony in the city of Taoyuan.

Taiwan last year became the first to legalise same-sex marriage in Asia, a part of the world where homosexuality remains illegal in many countries. But the island remains divided over other related issues, such as same-sex parenting, while gay [people] are only allowed to marry foreigners from countries where same-sex marriage is also legal.

The wedding comes as tens of thousands of people are expected to join Taipei’s annual Pride parade today, Saturday, likely one of the largest globally this year, due to coronavirus restrictions elsewhere.

The Commander of Taiwan Army gave his blessing to the two officers in uniforms, holding rainbow flags, and their civilian wives.

“We hope our bravery could inspire more fellow soldiers who have concerns to also come out bravely. You are actually not alone,” said Chen Ying-hsuan, a combat engineer lieutenant from the Army’s Eighth Legion.

Photos of the two couples posted on the Army’s Facebook page earlier this week quickly went viral, with congratulatory messages pouring in.

“I hope your love lasts forever. I support the national army,” read one message.

“The Army is finally becoming progressive. Congratulations,” said another.