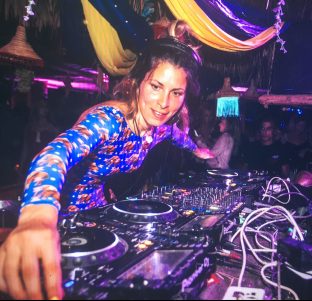 Lost Horizon is back. The world’s largest virtual reality music and arts venue has revealed its first season of huge virtual events, due to take place throughout December 2020, in the immersive world of Sansar.

The sprawling Lost Horizon multiverse, created by the team behind Glastonbury’s legendary Shangri-La, reopens with a series of virtual events, promising all of Lost Horizon’s surprise magic, including wild dance-floors, secret headliners, and hidden wormholes.

Lost Horizon is the closest experience to being at a real-life club, concert or festival, whilst still in your living room. Lost Horizon can now be accessed from any computer, tablet or phone – you don’t need special VR goggles, just the internet – and you can explore the entire venue in an interactive way, together with your friends.

Taking full advantage of Sansar’s interactivity, Lost Horizon’s new season of events will have a focus on human interaction, taking in everything from guided meditation, to speed-dating and art gallery tours. Each show will bring with it bespoke new creative content from cutting edge visual artists, re-imagining and refreshing Lost Horizon’s multitude of walls, corridors and screens.

Eight shows have been announced so far, with more to follow:

12th December will see HospitalityDnB make its second appearance in Lost Horizon on the Nomad stage for a mouth-watering and hip-shaking showcase. Spanning the full spectrum of the 174BPM sphere, and delivering the best in all things Hospital, alongside a mad line-up of the greats, including Kings of The Rollers & Inja, Flava D and Keeno, with special guest DJ Marky.

Channelling the sounds from Armada Music’s underground tinged-labels, Armada Record Box comes to Lost Horizon on 16th December. Home to the deeper, cutting-edge-sounds that Armada Music has to offer, the programming on this arena will cover all bases of melodic techno, percussive house, and floor-filling dance anthems, boasting names such as Goldfish, Low Steppa and Tensnake.

On 18th December, The Martinez Brothers will be hitting Lost Horizon’s Gas Tower for a night of New York flavour and absolute dance floor bombs. The Bronx, US DJ duo are two of the most recognisable names in global club culture.

Krust will be coming through Lost Horizon to the Gas Tower on Tuesday 22nd December to present the seismic The Edge of Everything. Joined by his peers to deconstruct and recreate new audio frontiers whilst immersed in a visual aesthetic to match this will be one for the heads.

Infected Mushroom will bring their pioneering psytrance music and unrivaled production quality to the Gas Tower on Wednesday 23rd December. Their VR premiere show will be specially curated by the band, showcasing rising star, Samra, followed by Bliss, before an Infected Mushroom live band show that will leave you drooling on the virtual dance floor, craving for more.

Globally renowned Mancunian production duo, Solardo, are continuing their city’s rich heritage in house music. After selling out all over the world, and conquering the consoles of the best festivals on the planet, on 26th December, they come to Lost Horizon to host a special Boxing Day event.

On 28th December, one of the UK’s best-loved, most imaginative and inclusive LGBTQ+ raves, Little Gay Brother comes to Lost Horizon with a show combining live performance, imaginative decor and a lovingly punk attitude, for a virtual celebration of diversity. Full information on this special show to come soon.

“This feels like a new frontier for culture and the digital realm. Technology has leaped forward and we can now create something truly sociable, interactive and connected… our mission is to reflect real culture in our virtual world! This is going to be fun!”

“Lost Horizon continues to thrill audiences with incredible virtual shows in times when people need it the most.  Sansar’s purpose is to deepen connections and community through the power of live entertainment, and Lost Horizon is the perfect partner to help us achieve that.  Together, we plan to close out 2020 with a bang.”

Full information on this special show to come soon.

Whether you’re in the middle of the dance floor in full VR, chatting via your PC’s mic to to gig-goers from anywhere in the world, or exploring the event stream across multiple camera angles on your web browser (Mac and PC) or app (Android and iOS), it’s a vibe like no other digital experience.

This reveal signals the next step of an incredible journey for Lost Horizon following July’s premiere four-stage festival to 4.36 million people, as it establishes itself as a new platform for artists unable to perform live during the pandemic and beyond.

Lost Horizon comes from the team behind Glastonbury’s Shangri-La. With its roots deep in contemporary music, art and activism, Shangri-La has established itself as a legendary field in UK festival culture, engaging a truly dynamic community of artists, builders, and revolutionary creators and known for showcasing  the latest “off mainstage” acts, Shangri-La has served as a launchpad for some of music’s biggest names, with artists such as Lady Gaga, Rudimental, Disclosure and Pendulum gracing its stages early in their careers. This makes Lost Horizon the perfect place to launch the next era of live music.

Lost Horizon was created by the team behind Shangri-La, in partnership with VR JAM and Sansar and launched in July 2020 in response to the global pandemic.