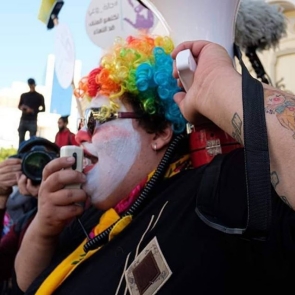 (Reuters) – A Tunisian judge sentenced a feminist activist on Thursday to six months in prison, on charges of “insulting police and abuse of morals,” her lawyers said, raising concerns about freedom of expression in the North African country, a decade after its Arab Spring revolution.

Rania Amdouni, 26, a member of the human rights group, Damj, Tunisian Association for Justice and Equality, was arrested last weekend in Tunis, the country’s capital. Amdouni was involved in the recent protests calling for social and economic justice and against police abuse during [the last two months].

“Rania was sentenced 6 months for insulting police and abuse of morals,” said Saida Guarach, who is among the lawyers representing Amdouni.

Amin Hidiji, who represented Amdouni in a Tunis court on Thursday, confirmed the sentence.

Activists told Reuters [that] Amdouni was increasingly targeted since February, as she became a visible part of the daily protests in the capital.

Asrar Ben Jouira, a feminist activist, told Reuters that Amdouni was arrested after she was chased by policemen who were harassing her.

Ben Jouira said that Amdouni went to a police department [to] complain about the officers, but the police refused to accept her complaint, and instead accused her of insulting police.

Police and the Interior Ministry were not immediately available for comment.

“[Rania’s] case confirms that freedoms have become threatened and that the message is to silence the protesters… (they are choosing the wrong) way after a decade of the revolution,” Guarach told Reuters.

Protesters have been demonstrating in Tunisia since January 15, the day after the 10th anniversary of the revolution, calling for social equality and access to jobs.

The police arrested more than 1,600 people during the protests, and dozens of arrestees complained of ill-treatment and torture. Tunisian authorities denied the accusations, and said that the police performed well.