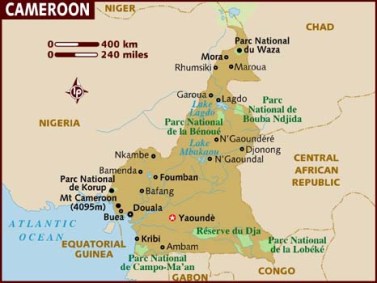 (Reuters) – Coming from Cameroon, where letting it be known that she was a lesbian could lead to prison time, activist and social media influencer, Bandy Kiki, struggled to adjust to her newfound safety, after emigrating to Britain a decade ago.

Homosexuality is a criminal offence in Cameroon, punishable by up to five years in prison.

“I kept thinking, ‘Aren’t the police going to show up and arrest everybody?'” she said about gatherings she would attend with members of the LGBT community in Manchester.

“My friends kept saying, ‘Kiki, it’s legal in this country, chill.’ But I said:

‘No, because sometimes the law will say one thing and the police will do something else’,” she told Reuters, in an interview via Skype from Manchester.

As LGBT rights have advanced in countries around the world, Kiki said she had watched with disappointment as her own government doubled down on homophobic policies.

In recent weeks, she has been promoting a high-profile case from Cameroon, in which two transgender women were arrested in February, for wearing women’s clothing at a restaurant, and were charged this month with “attempted homosexuality”.

The two women, Loic Njeukam, a local social media celebrity known as Shakiro, and […] Patricia, have spent more than two months in prison, waiting for their trial to begin.

The court, in the coastal city of Douala, is expected to hear arguments on Monday. A guilty verdict could carry a sentence of up to five years.

Loic and [Patricia’s] experience in jail, their lawyer, Alice Nkom said, resembles “a life in hell”. They are mocked and threatened by prisoners and guards alike, and are kept safe only by paying for protection, she said.

The arrests seem to be part of “an overall uptick in police action” against sexual minorities, it added.

Kiki says the crackdown on Cameroon’s LGBT community is just a symptom of a larger problem throughout Cameroonian society.

“Homophobia is like a binding glue when it comes to Cameroonians,” Kiki said.

“When it comes to hating LGBTQ people, they all come together.”