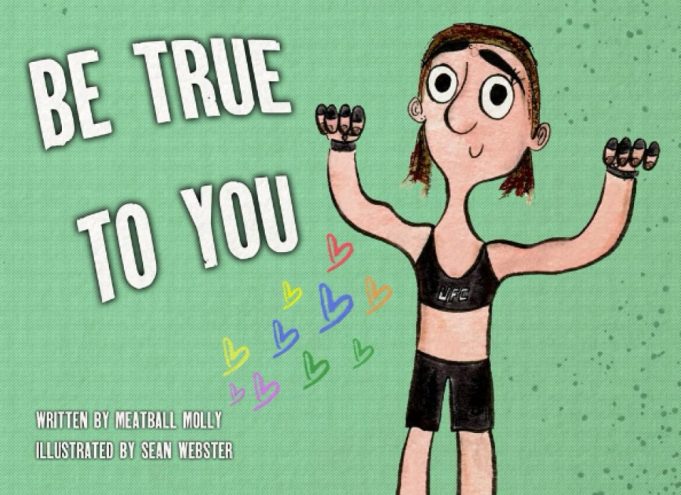 (Reuters) – UFC fighter Molly McCann has faced some tough opponents in the octagon, but it is her struggle before coming out as gay that is the subject of her new book, ‘Be True To You’, which she has written to help young people discuss their sexuality.

Known to fans as ‘Meatball’, the 31-year-old flyweight told Reuters that she had her six-year-old nephew in mind, as she tried describe her struggle for self-acceptance.

“It’s a short illustrated story about me coming out, to see if I can help kids — basically it’s a 24-page story of me and my life and why I felt like I couldn’t come out, and why I did come out,” she said ahead of her fight with Ji Yeon Kim on August 14.

“There’s a space at the back of the book, it’s about four pages long, it says ‘here’s a place for you to tell your story and to draw your story’. Coaches, social workers, teachers, parents, these are the people that have got in touch with me and said: ‘Thank you for your book, I’m using it with my child’,” she added.

McCann, a former champion in the Cage Warriors promotion, who holds a professional MMA record of 10 wins and four losses, grew up in Liverpool, and spent some of her teenage years going to school in the south coast town of Bournemouth.

A talented footballer, who played for both Bournemouth and Liverpool Ladies, and considered a professional career, she said that she never fitted the stereotype of a girl who liked pink and played with dolls.

“I was skitted (teased) from the age of nine, 10, 11 because I played sports – it was like, ‘Molly’s gay, lesbian, blah blah blah’. I was just like, I’m not even entertaining that conversation, I’m just going to go the other way – that’s not to say I went with all the boys, I just chose not to go near anyone and to focus on being a professional footballer or fighter,” she said.

McCann said it was the strong bonds she formed with her MMA training partners that helped her to come out at the age of 25.

“The reason I came out is that the gym I’m at now and another gym, they made me feel so comfortable in my skin that the insecurities didn’t matter anymore,” she said, describing a culture where everyone is equal.

“You can’t be the top and the best at everything, you learn to be accepting. The culture is ‘we are one’ – ethnicity, race, class, gender, sexuality kind of really doesn’t matter in my world and in what I do.”

Though coming out has negatively affected some of her relationships, McCann says that on the whole her family were very positive, including her cousins, who used to tease her when she was younger.

McCann has recently taken on a role as ambassador for LGBT+ rights charity, Stonewall, and one of her first initiatives is to take the rainbow laces worn by footballers, and encourage boxers and fighters to lace up their gloves with them to raise awareness.

She still gets homophobic abuse on social media, but McCann says that after going through her coming-out journey, she finds it a lot easier to deal with now than in her teenage years and her early twenties.

“If the worst thing that you can say to me is that I’m gay, then what else have you got for me? Because I don’t feel bad about who I am.”

← Summer of Soul (…Or, When the Revolution Could Not Be Televised)
NHL: Prokop first player with contract to say he is gay →