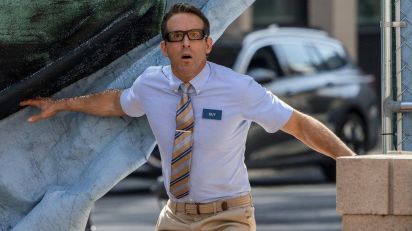 Guy (Reynolds) is perpetually cheerful. He loves living a supremely average life in Free City, and has the exact same routine every day. He gets up, greets his goldfish, dresses in a blue shirt, khakis and a tie, grabs the best coffee in the world, and heads to work in the bank, which is robbed twice a day, but it’s fine, because he is always looking forward to beers on the beach with his friend after work.

Unfortunately, Guy is also a NPC (non-playable character) in a computer game, and his dream girl, Molotov Girl/Millie (Comer) is actually the real-life creator of software that was used to create the game, Free City, which he inhabits. But that was stolen by greedy publisher, Antwan (Waititi), whose wardrobe is clearly inspired by early naughties Kanye. So Guy and Millie must work together in the game to get the evidence to prove that her work was stolen. And just for added pressure, in 48 hours Antwan is about to completely erase the game.

With most of this set in a video game, the Ready Player One comparisons are easy. And as the story evolves and the public begin following Guy’s quest to save Free City, it somewhat turns into the Truman show.

Ryan Reynolds just plays Ryan Reynolds – something he has been doing for years. This is fine, it’s very entertaining. But he can actually act outside of this persona he’s created, and it would be nice to see him stretch those acting muscles at some point. However, his persona works perfectly here. His OTT cheerfulness, chiselled features, and ability to appear innocent/gormless (depending on your point of view) absolutely suit a character that is originally supposed to be little more than a computer rendering.

Comer brings a huge amount of depth to Molotov/Millie, a character that could easily have been shallow and gratuitous. She bounces between her action hero computer-game character, and her real world geeky developer with aplomb.

Meanwhile, for someone who seems like a really likeable guy in real life, Waititi seems to relish playing baddies, and he is positively deranged as Antwan. His performance is ridiculously OTT, but given the egos involved in the gaming business, that works here.

Visually this is fantastic, with Levy ensuring that there is a huge distinction between the worlds. The graphics in the video game are fantastic. The soundtrack is also amazing, and will definitely bring back a few memories and have you tapping your feet.

On paper, this sounds like a really silly idea, but thanks to the brilliant talents involved, Free Guy works. It is extremely funny and entertaining, and manages to just about stay the right side of schmaltz. It also serves as an indictment on society’s addiction to online interaction, as opposed to physical interaction, but that’s a whole different review.

This doesn’t take itself too seriously, and is great fun, and an extremely entertaining popcorn movie that will definitely help you switch off from the current world madness for a couple of hours.