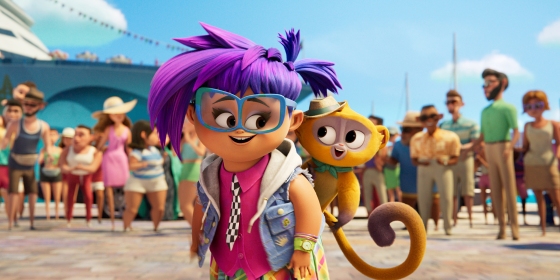 This film was first pitched to Dreamworks Animation by Lin Manuel-Mirandea back in 2010. I won’t bore you with all the details, but it has been around the houses, before getting picked up by Sony Pictures Animation as their first ever musical.

It stars the voice of Miranda, as a one-of-a-kind kinkajou named Vivo, who spends his day entertaining crowds with his owner, Andrés (de Marcos González) in Havana.

When Andrés receives a letter from an old flame, the famous Marta Sandoval (Estefan), inviting him to her farewell concert in Miami, he is hugely excited to finally be able to give her a song he wrote, and declare his love for her.

However, tragedy strikes before he can travel, and it is left to Vivo to deliver his bequest, aided by Andrés’ grand-niece, Gabi (Simo), an extremely enthusiastic teen who takes a shine to him.

Miranda wrote the songs for this, and they are as catchy as you would expect, and will have you tapping your feet even if you don’t know the lyrics to sing along.

He also provides a suitably charming take on Vivo’s voice, that really draws you in. While the story isn’t anything new – just last week Spirit Untamed, a movie which sees a young girl go on an adventure with a beloved animal, came out, and there are numerous others with a similar plot – this benefits from the beautiful and colourful animation. Sony’s animation team will surely soon be mentioned in the same breath as Pixar, and the original studio attached to this, Dreamworks.

While it doesn’t quite have the multi-layered humour that often makes animated offerings more tolerable, for the adults sitting through them with their LOs, the music and the atmosphere will suck you in.

It is unlikely to become an obsession for children, in the way that movies like Minions or Frozen have done, but it will still have them begging to watch it more than once. It is entertaining, engaging, well-paced, and utterly delightful. See trailer below: