Netflix: Production begins in Ireland on The Wonder 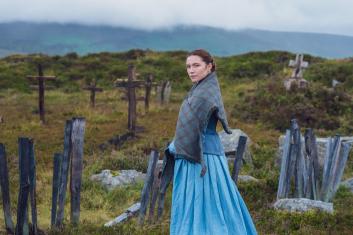 The Irish Midlands, 1862 – a young girl stops eating, but remains miraculously alive and well. English nurse, Lib Wright, is brought to a tiny village to observe eleven-year old Anna O’Donnell. Tourists and pilgrims mass to witness the girl, who is said to have survived without food for months. Is the village harbouring a saint ‘surviving on manna from heaven’, or are there more ominous motives at work? A psychological thriller inspired by the 19th century phenomenon of the ‘fasting girls’, and adapted from the acclaimed novel by Emma Donoghue (Room).

Florence Pugh (Lib Wright) is currently starring in Black Widow from Marvel Studios, and has recently finished filming Olivia Wilde’s sophomore feature, Don’t Worry Darling. Tom Burke (Will Byrne) recently starred as Orson Welles in David Fincher’s Mank, and will next be seen alongside Ruth Wilson in Harry Wootliff’s True Things About Me.

The film is the first production commissioned out of the UK by Fiona Lamptey. The new Netflix UK & Ireland film slate will create ambitious, distinctive event films, to give a global platform to both established and emerging talent.

Emma Donoghue follows her Academy Award© nominated adaptation of 2010 novel Room, co-writing for the screen her story inspired by the famous historical phenomenon of the ‘fasting girls’.

“Bringing the powerful novel The Wonder by Emma Donoghue to the screen not only offers me the chance to portray the collision between reason and faith, individual and community, obedience and rebellion, but also to explore my own interpretation of what a “period” film can be. I couldn’t be more thrilled that the magnetic and courageous Florence Pugh will play our fierce female lead. I am also excited to be reunited with Ed Guiney and Element, to have the privilege to work with Tessa Ross and House, and honoured that Netflix have chosen The Wonder as their first UK Features endeavour.”

“The Wonder has everything we’re looking for at Netflix for our UK & Ireland Film slate – a rich, authentic story that comes from these shores along with creative excellence across source material, script, director and actors. I’m incredibly excited to work with such outstanding talent on a unique female lead story. Creating opportunities for UK & Irish talent like Florence in ambitious, distinctive stories of scale – embedded in our landscape – is a key commitment for the film slate we are building here.”