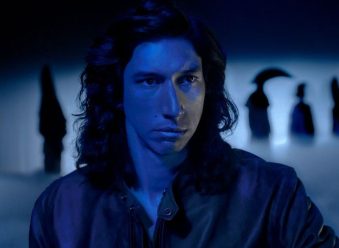 This film hits cinemas fresh from its success at the Cannes film Festival, where Carax won best director, and Sparks (the band, comprised of brothers Ron and Russell Mael) won the best soundtrack award for their work on the film.

In light of the success of Edgar Wright’s The Sparks Brothers documentary, there is also renewed interest in the group, who have been around for half a century, so this film is being quite eagerly anticipated by fans old and new.

Equally, fans of cult director, Carax, are interested to see what he does with the material, in this, his first English language film.

The story is a pretty simple one. A provocative stand-up comedian, Henry McHenry (Driver) and a world-famous soprano, Ann Desfranoux (Cotillard) fall in love, much to the delight of the celebrity press, and their respective fans.

They have a child, Annette, (portrayed by a marionette for most of the film) but when Ann’s career eclipses Henry’s, he is overcome with jealousy, and kills her. Following her death, her toddler daughter develops the ability to sing in her voice, which haunts Henry, but, struggling for money, he contacts Ann’s former accompanist (Helberg) to assist him in getting her onto stages. She becomes an instant sensation who is adored the world over, but her father’s murderous rage is never far from the surface.

Yes, this is a musical, but if you are expecting jazz hands, razzle-dazzle, and Fossey-esque choreography, you will be disappointed. You can tell that this is a different musical take from the opening track “May We Start”, which is a meta-moment featuring Carax, Sparks, and the cast seeking permission to begin, before the story starts properly.

Many of the songs rely on repetition for emotional effect. This is something Sparks have played around with a lot in their music, perhaps most famously in My Baby’s Taking Me Home. Neither Driver nor Cotillard are singers (her opera scenes are dubbed) and at times they appear to struggle with the music , in particular Driver. However, they both give decent performances, although the standout here is former Big Bang star, Helberg, who shines as Ann’s lovelorn accompanist, especially in scenes between himself and Annette.

The film was conceived by Sparks, who originally envisaged it as a stage musical, which definitely shows in Carax’s direction.

At times, this feels like a filmed theatre show rather than a movie. It doesn’t follow a straightforward narrative, and is filled with whimsy and experimentation. It has multiple underlying themes, and in trying to highlight them all, it feels a bit jumbled in parts, which just adds to the whimsy.

This walks a fine line between fantasy and farce, and won’t be to everyone’s taste. There is no denying it is ambitious and extremely avant-garde. It does, however, also have a charm about it that keeps you engaged.

It is the sort of film that grows on you, rather than a love at first sight affair, and will probably require a couple of watches for people to get a handle on the multiple layers and metaphors, but it has all the makings of a future cult classic.