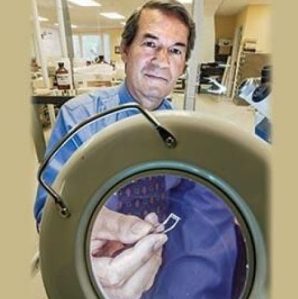 Although the title may make this sound like a Terminator prequel, this is in fact a documentary about the work of pioneering Irish neurosurgeon, Dr Phil Kennedy. And if, like most people, the thought of surgery brings you out in a cold sweat, then prepare to be completely and utterly gobsmacked, as he takes us through the decision to have surgery on his own brain, to implant electrodes he had developed, which he hoped would allow ‘locked-in’ patients to communicate.

This film explores his cutting-edge research, which made global headlines in the 80s and 90s. It is not for the squeamish – we see his own brain surgery in graphic detail (definitely don’t eat before watching this!). And his calm demeanour about having someone literally cut into his brain, in order to advance his work, is both admirable and disturbing. Indeed, it is something that all the contributors here, including his scientific peers, journalists, family, and families of patients, struggle with.

To be fair- it does sound like the start of a dodgy sci-fi movie. In fact, I’m surprised no one has made a movie about a scientist putting implants into his own brain, making him part cyborg! (Makes note to start writing a script!)

To be fair to Kennedy, his motivations do seem to be purely altruistic. He really does seem to want to make the world a better place, even if it means taking a huge gamble with his own health.

His drive is extraordinary, as is his commitment to his research. But you will be left with serious questions about the ethics of his self-experimentation. It also raises some frightening questions about the future of mankind, as we are presented with the idea that in a few years, we will have the option to ‘enhance’ our brains, so that we will be able to access the internet directly without the need for a computer, or make a phone call without the need for a handset, a la Total Recall.

This is a fascinating look at science-fact, and what it means for humans. It raises many questions, but leaves you to make up your own mind about the answers.

As a result, it will either leave you feeling hopeful for the future of mankind, or terrified for where we are going as a race, depending on your point of view regarding voluntary ‘enhancements’.

That’s not to detract from Kennedy’s accomplishments, and indeed he is an enigmatic subject for this film, which is extremely accessible, even for those who have zero interest in science.

Not for the squeamish, but this is an extremely engaging insight into some remarkable scientific research, and its potential impact on the world.